While some have lived there for generations, others migrate there in perceptible movements. In fact, the South-West borough in which the three neighborhoods of Griffintown, Little Burgundy and Saint-Henri nestle grew by 9.2% between 2011 and 2016. This is the largest intercensal progression recorded since 1966. A meeting point between heritage and renewal, the Canal Quarters have a distinct soul, vibrant with the seasons. Who are the people who build and live it?

According to a demographic study released in June 2014, there are now more than 32,500 residents in les Quartiers du Canal neighborhoods. The 25 to 64 age group is the most strongly represented, making up 75.9% of the population of Griffintown, 58% of that of Little Burgundy and 64.6% of that of St-Henri. It can be seen that the canal districts attract a population of working age. In this respect, the most frequently identified professional sectors in the territory are business, finance, administration, management, education, and sales and services.

The recent socio-demographic study of the 2016 census confirms the dynamism of recent years, indicating that the total population of the Sud-Ouest district is now 78 151 inhabitants. The population is mixed (50.5% of women – 49.5% of men), a median age of 36 years and note that 44% of the population of South-West lives in couples.

With a level of education that is generally higher than the average of the neighborhoods of Île-de-Montréal, the Canal Quarters have a significant number of university graduates or post-secondary institution graduates. Significantly, there are 92% of post-secondary graduates in Griffintown, 77% of whom are university graduates. In addition, the unemployment rate is, on average, comparable to that of the rest of the city. The average household income, varying by neighborhood, is between $ 87,929 and $ 47,975. In this regard, there is a high concentration of households composed of a single individual – between 45% and 54% of households – while families with children are more rare in Griffintown. However, they are more numerous in Little Burgundy and St-Henri.

We also note that bilingualism is widespread in les Quartiers du Canal. Although Griffintown is slightly more English-speaking while Little Burgundy and St. Henri have a generally more Francophone population, statistics show that, depending on the neighborhood surveyed, between 57% and 75% of respondents speak fluently in French and English. In 2016, more than 62% of the borough’s total population said they were able to conduct a conversation in both languages. 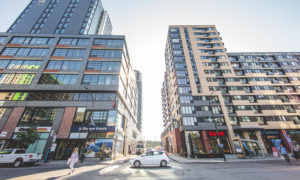 In terms of real estate business, les Quartiers du Canal stand out for their offer of premises available at competitive costs. With moderate rents compared to downtown and other popular neighborhoods, despite strong demand for office space in the area, the territory attracts talent. The office tower projects confirm the ever-growing potential of les Quartiers du Canal with a view to strategic investment. To date, a vast majority of traders (77%) opt for rental when it comes time to invest in a place where to exploit their professional and commercial activities. The ground floor is the most in-demand level, as (79%) businesses choose to locate there for reasons of accessibility. More than half of the homeowners have been in the industry for more than a decade (55%).

Les Quartiers du Canal are undeniable, innovative, trendy and alive, and the sense of belonging encourages businesses to stay there in a sustainable way and continues to attract newcomers.