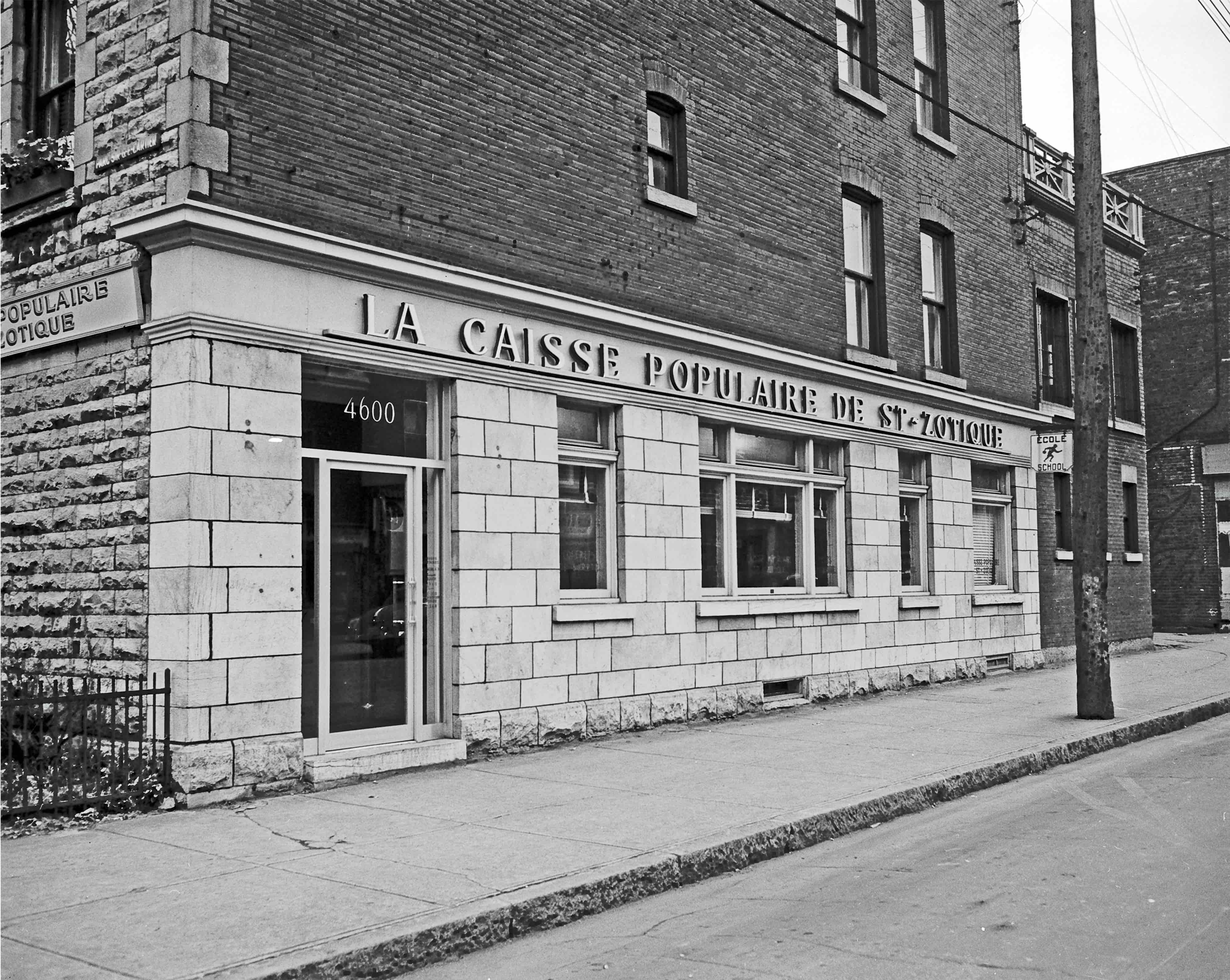 We invite you to relive the atmosphere of some epochs revealing a very dynamic industrial and commercial past. This journey of twenty-four addresses of the Saint-Henri of yesteryear reconciles in pictures the past and the present, sometimes making use of memories, sometimes illustrating the changes that have marked this district in the movement towards the incredible commercial effervescence of today. Over the decades, heritage buildings have resisted, businesses are changing, the population is diversifying and the landscape of our streets is changing. Discover 24 addresses and 30 pictures to immerse yourself in the Saint-Henri of yesterday while enjoying the vitality and commercial diversity of today. This project was conducted by the SDC - Les Quartiers du Canal in collaboration with the Historical Society of Saint-Henri.

Place Saint-Henri in all its glory in 1947. This was Saint-Henri’s city centre, with its monumental church in the middle, college to the left, and convent to the right. All of these buildings were demolished in 1970 to make way for the high school and pool. The road was much wider back then than it is today, and was once used by the city’s street cars, as is shown by the network of electrical wires overhead. It was also used by the railway that passed through the middle of Saint-Henri. 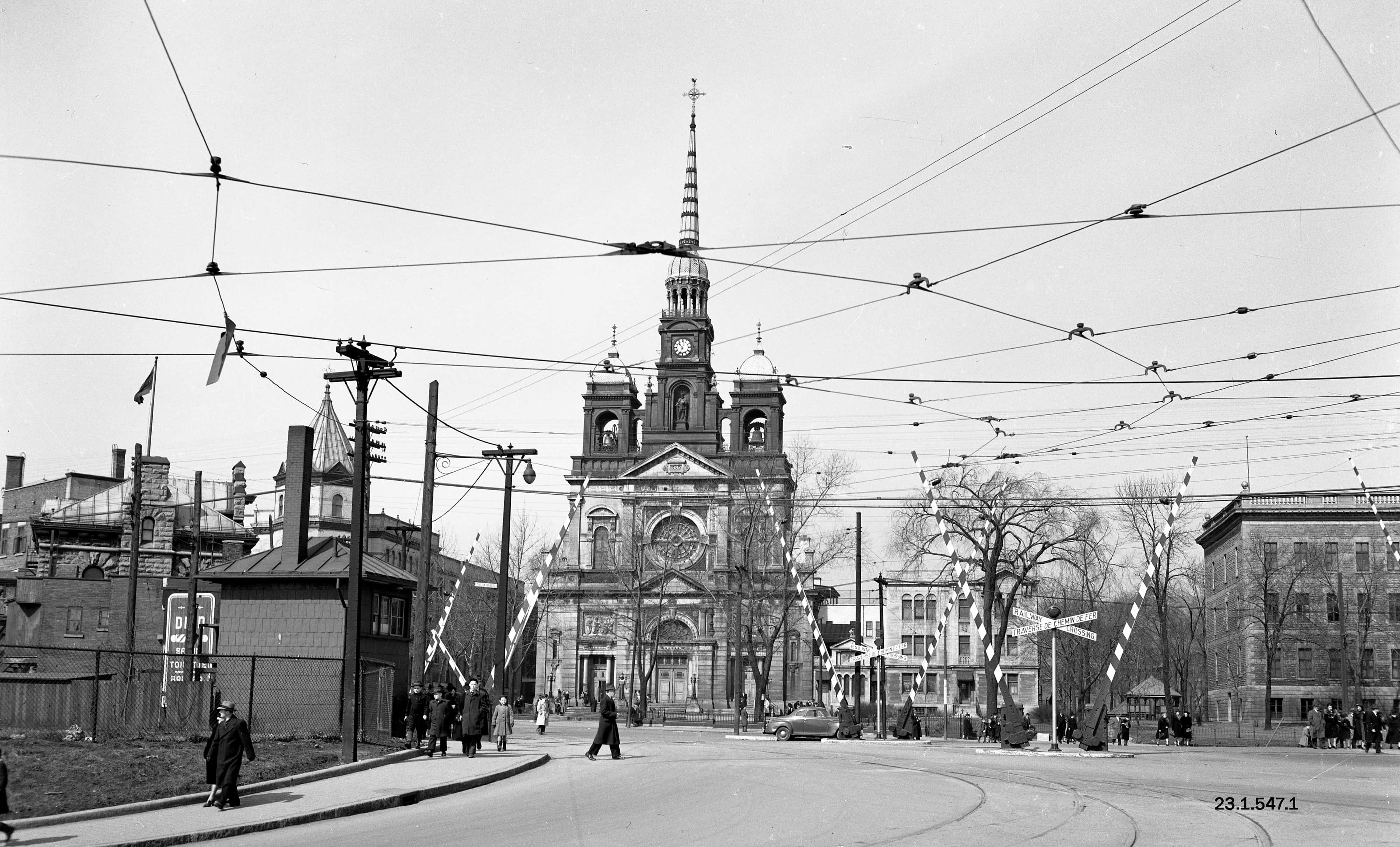 The oldest building in Place Saint-Henri was constructed in 1893; it was originally the site of the Saint-Henri post office. The building continued to serve this purpose until 1953, and was eventually occupied by Caisse Populaire de Saint-Henri in 1955. The Landreville insurance company occupied the second floor for more than 25 years. The building has been beautifully preserved. Today, the site is home to H4C restaurant. 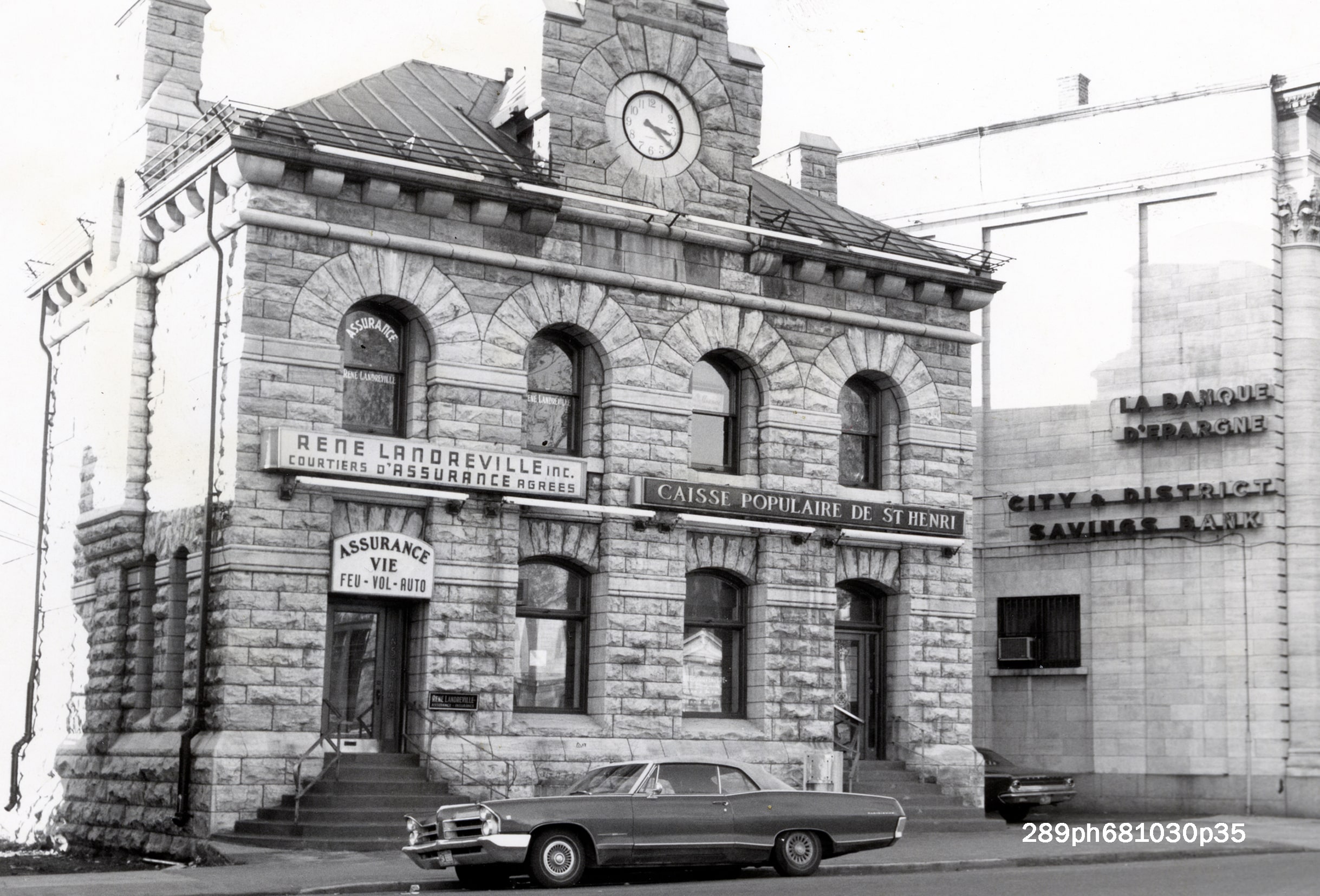 John’s Restaurant was initially located at 4221 Notre-Dame Street West. The owner, John Volikakis, is pictured at the centre of this photo. The restaurant remained here until 1940, before moving to the corner of Sainte-Marguerite Street. Volikakis’s son took over the business in the 1960s. The restaurant was then renamed “New John’s.” Displaying a high level of community involvement, it became one of the most popular restaurants in Saint-Henri. John’s granddaughters, Jo-Ann and Pauline, kept the tradition alive until the 2000s. Today, the foundation Bharat Bhavan is located at this adress. 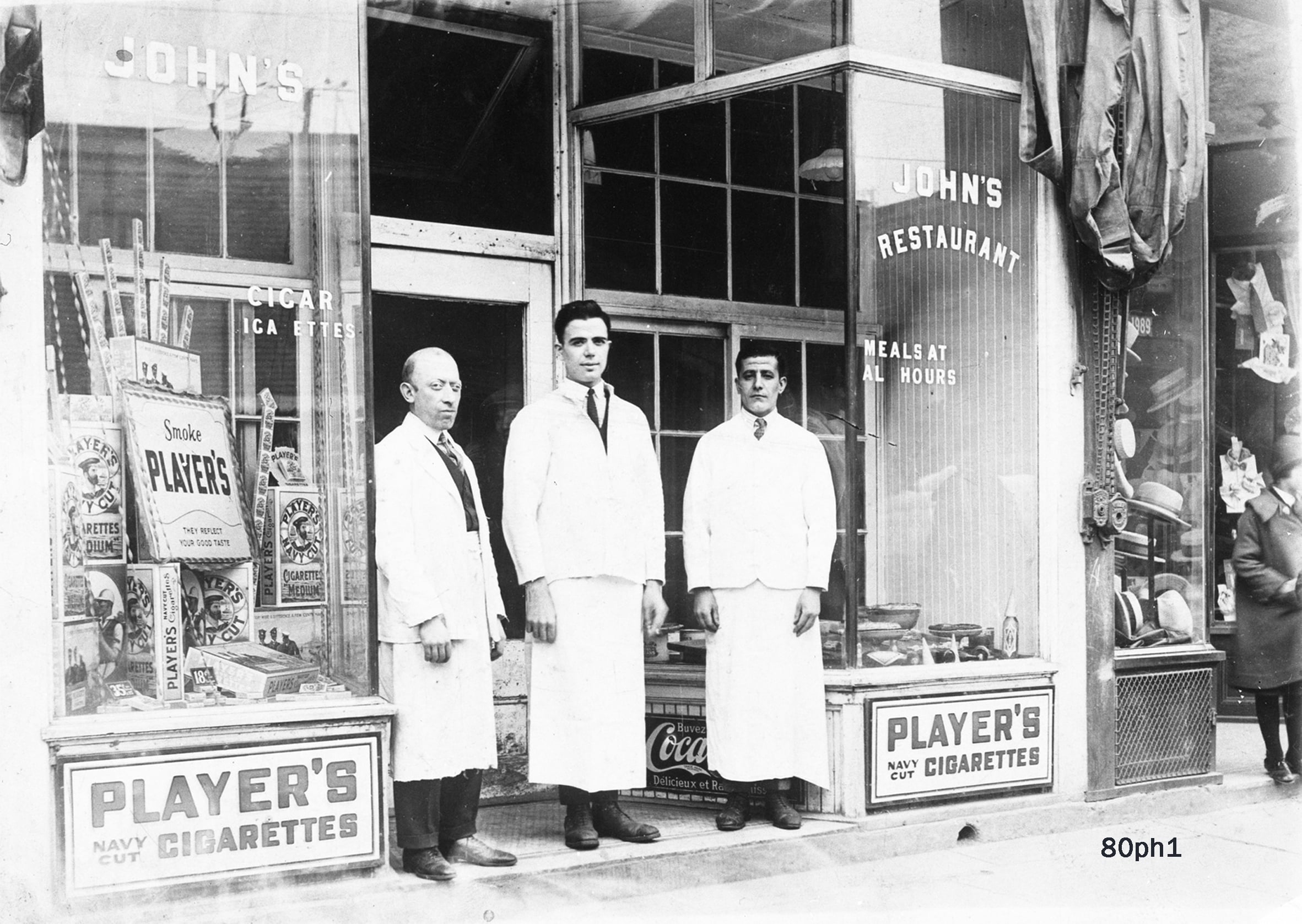 The Shanks & Frère appliance store was located at 4225 Notre-Dame West, at the corner of Saint-Philippe Street. The building was constructed in 1940 and was replaced in the 2000s to accommodate the Bharat Bhavan Foundation. Note the large vertical neon sign announcing Frigidaire brand appliances. 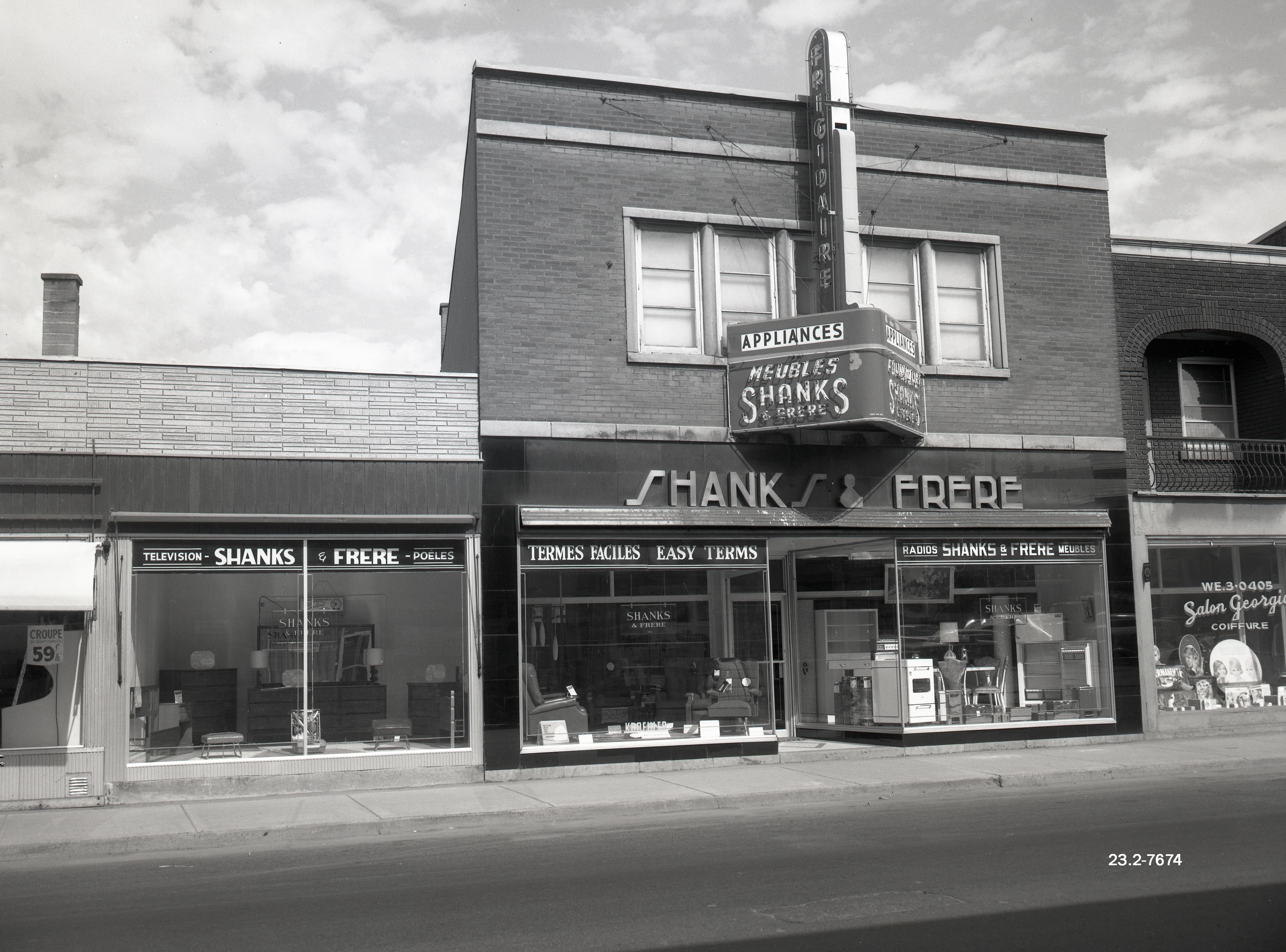 This beautiful holiday window display was created by florist Marcel Berthiaume in 1964. The shop was first established at 4275 Notre-Dame West in 1951. The building was demolished in 2005 after being ravaged by fire. At the time, the POPIR housing committee occupied the second floor. 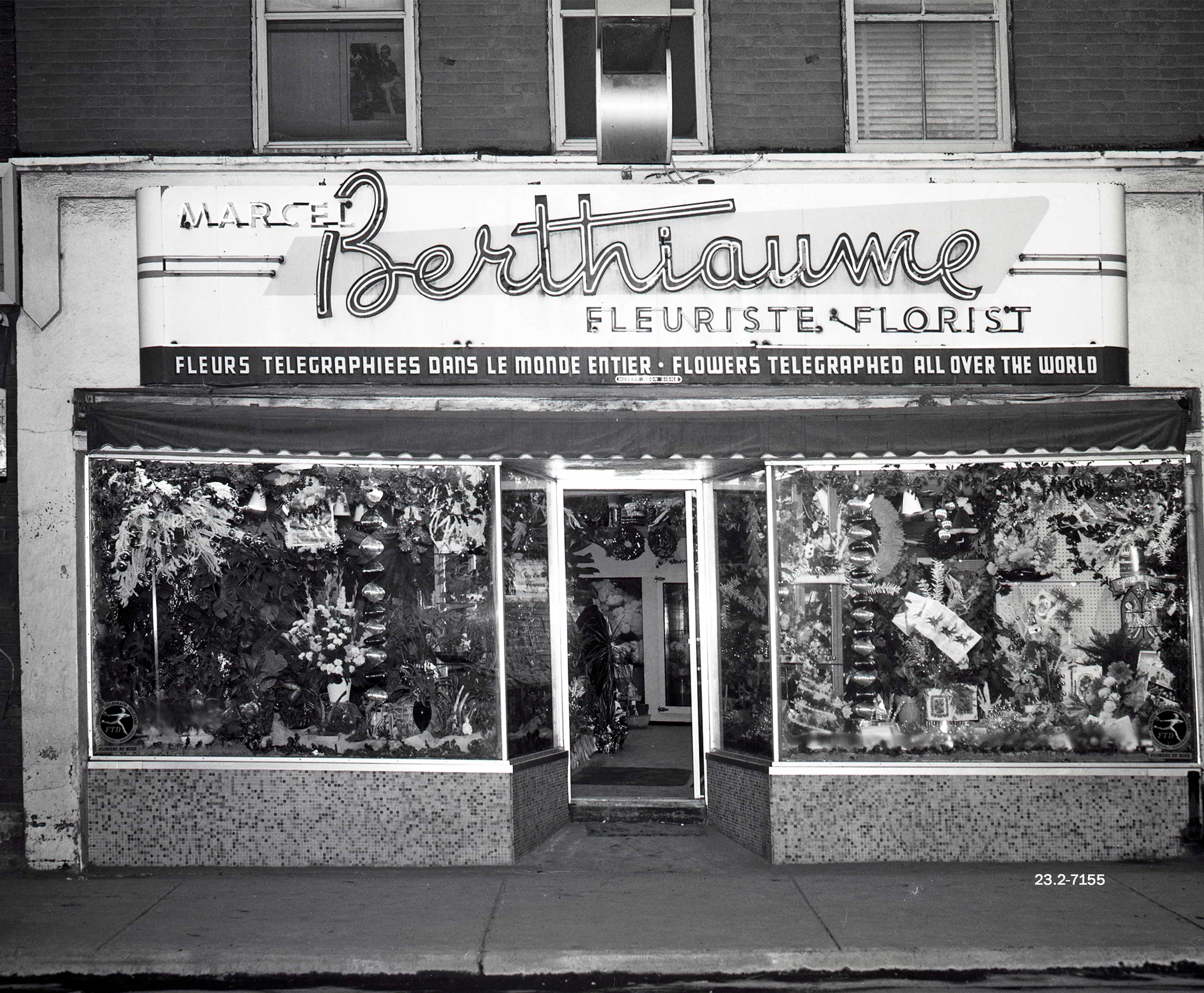 Located at the corner of Sainte-Marguerite and Notre-Dame Ouest, Eugène Desjardins’ Magasin du Bon Marché had everything a Saint-Henri housewife might need between 1900 and 1915. Note the wooden sidewalks and unpaved roads. The Jos Alepin clothing store (not to be confused with the other Alepins in Place Saint-Henri) would later occupy this space until the late 1970s. You can now find the restaurant Pikeos at 4293 Notre-Dame West.

The Laurion restaurant in the late 1950s. Note the number of soft drink advertisements on the facade. Now known as Dépanneur Laurion, a convenience store, this site is still easily recognizable today 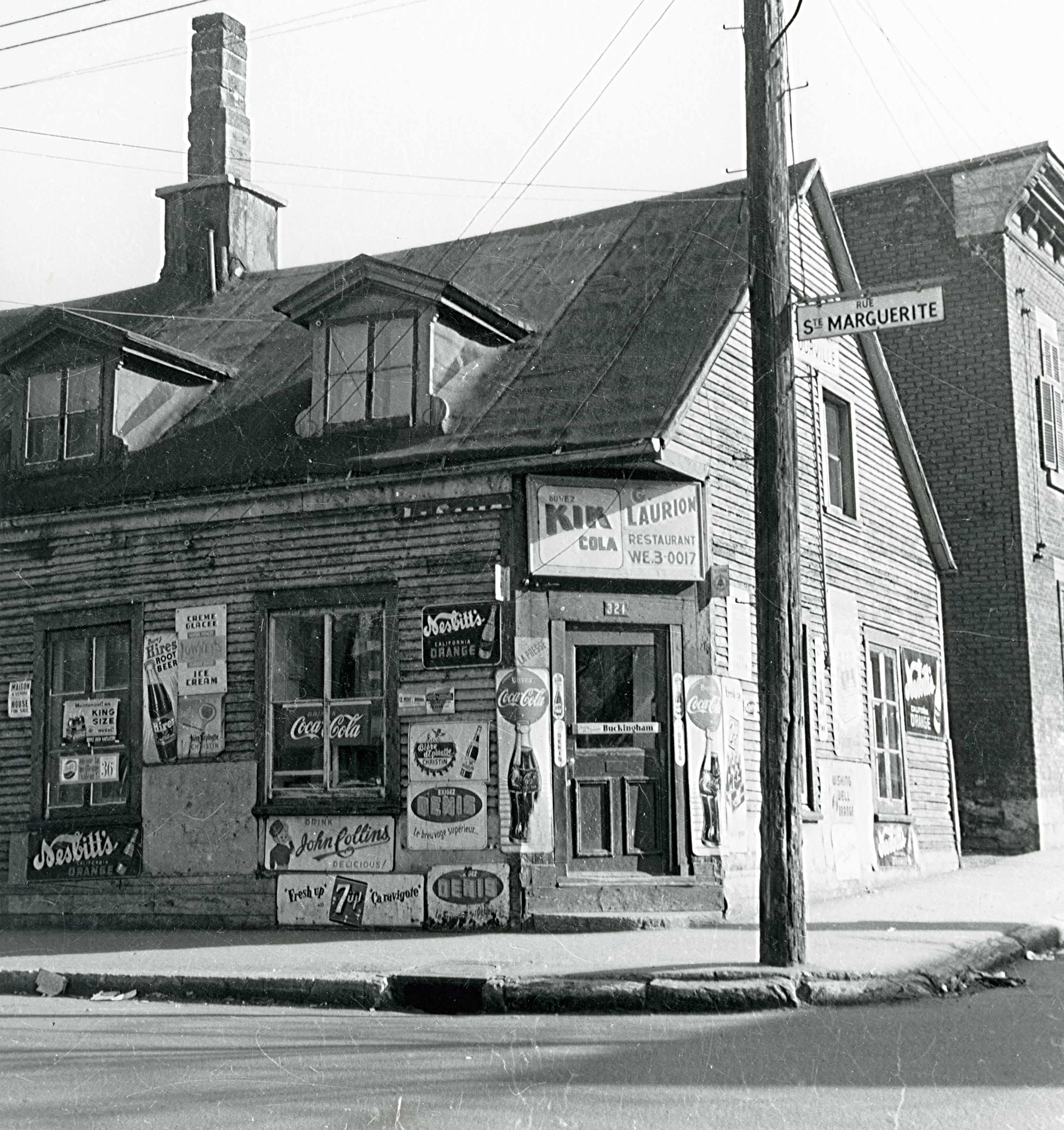 The grocer and butcher J.B. Désautels ran this shop at the corner of de Beaudoin and Notre-Dame from 1892 to 1920. The J.A. Blais hardware store later occupied the space until around 1966. The location remains easily recognizable today due to the window display’s entablature, which FF Pizza has carefully preserved. 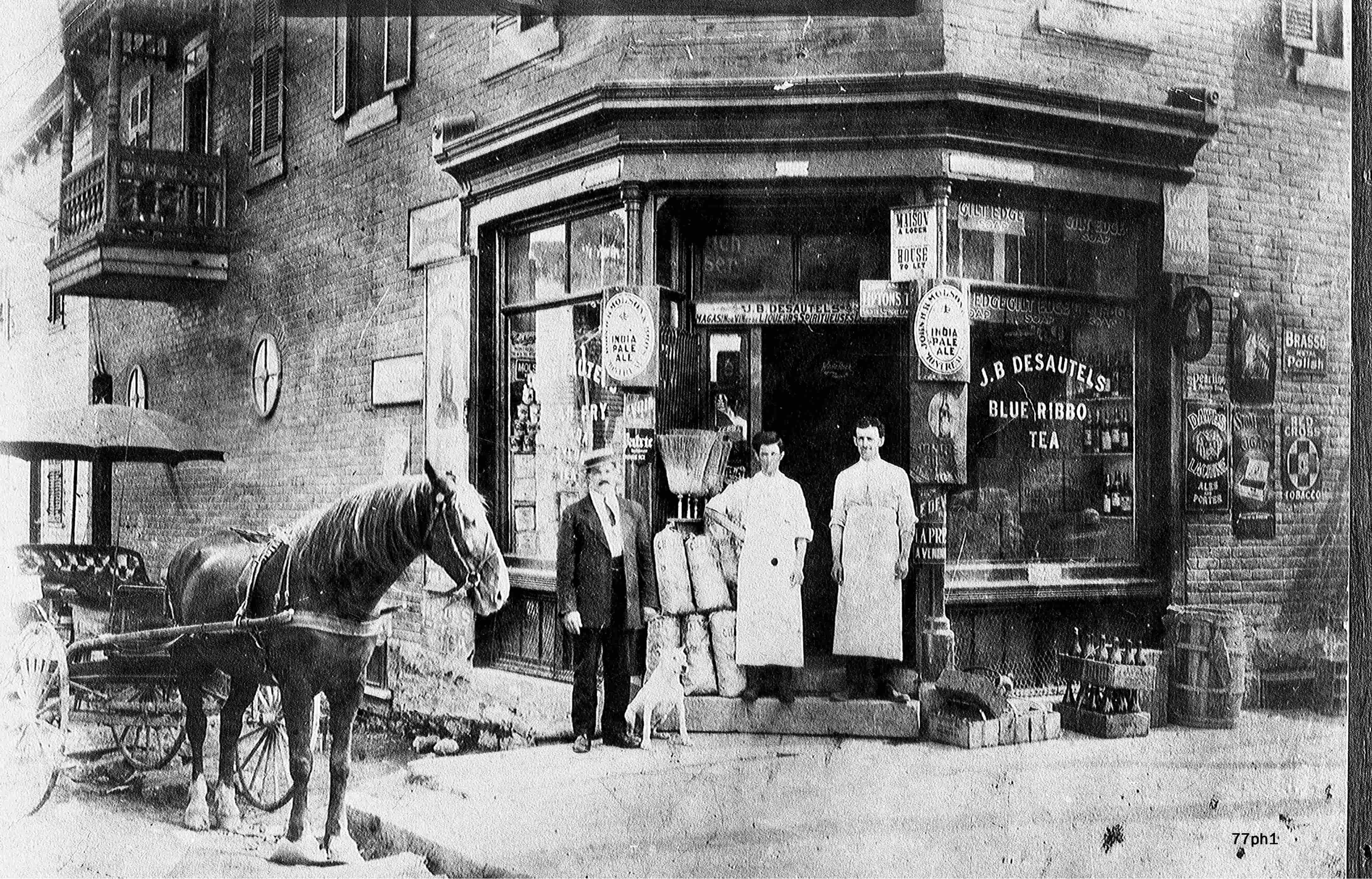 4600 Notre-Dame West was home to Caisse Populaire Saint-Zotique from 1951 until it moved to its current location at 4545 Notre-Dame West in 1966. The premises were occupied by a hair salon for several years until 2017 when the delicious La Diperie ice cream franchise and Café Cordova moved in.

In 1898, the City of Saint-Henri built a second fire station to service the area located south of the railway. It would eventually become known as Station No. 24 after Saint-Henri was annexed by the City of Montreal in 1905. It remained operational until 1963 when it was converted to a library at the urging of local citizens. In 2008, it was moved across the street. The now empty building still belongs to the City of Montreal. The South West borough, as well as the City of Montreal, intend to maintain a cultural dimension to the building. 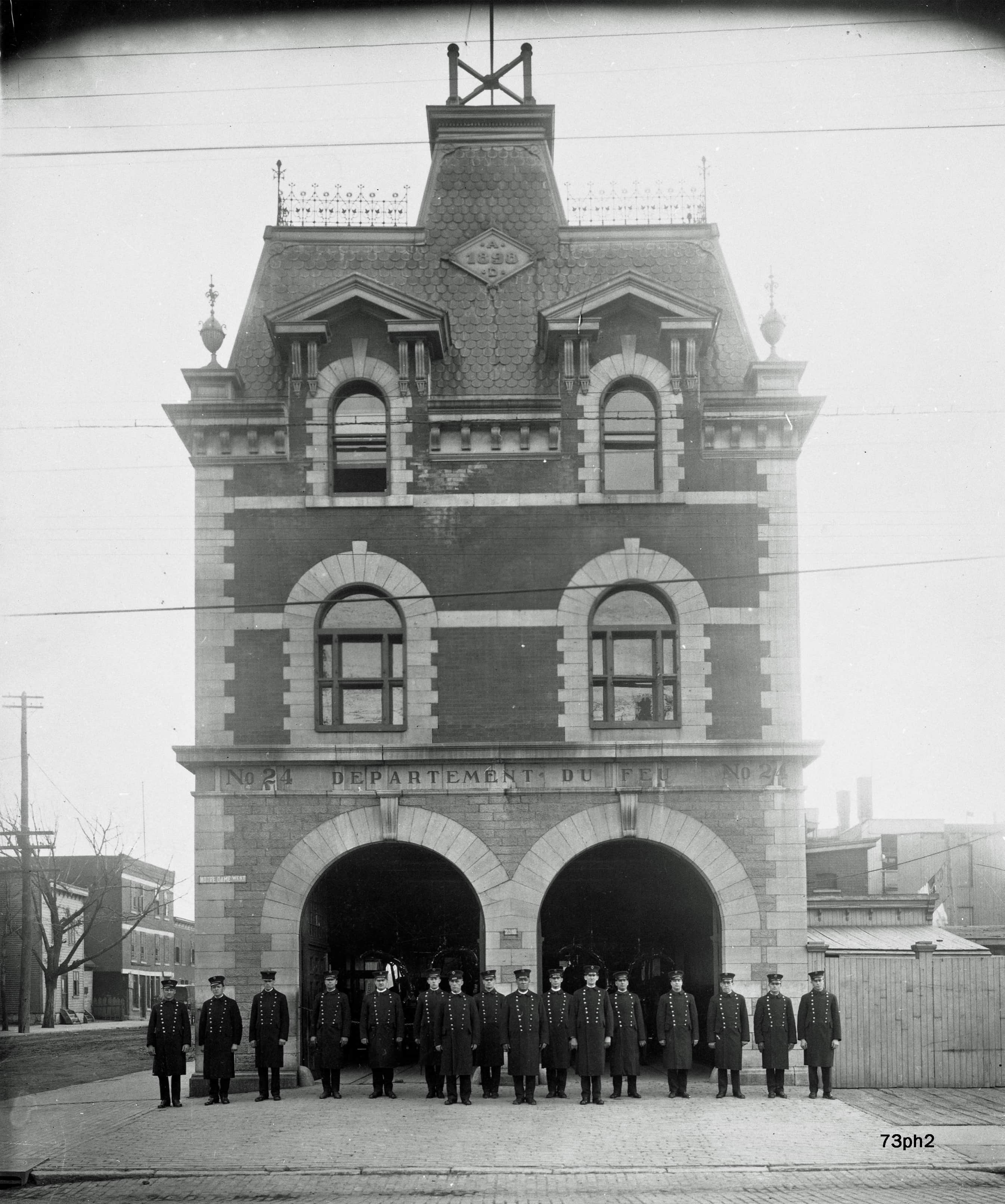 A small Anglican chapel named Église Saint-Simon once sat at the corner of de Courcelles. Marché Saint-Zotique was located right next door. The lot was purchased in the early 1960s by the Johnson Wire Works company, which was seeking to expand its factory located on Dagenais Street. The company was the last major employer in the neighborhood and celebrated its 100th anniversary in 2001. Its gradual closing led to the sale of this building, which has housed the Saint-Henri public library since 2008.

The Lalumière restaurant was located at the corner of de Courcelle and Saint Jacques for 50 years, from 1920 to 1970. It was frequently patronized by the staff working at the streetcar and bus depot located right across the street. In the 1950s, it was open 24 hours a day. Witnesses of the era report that Saturday nights often culminated at Lalumière's, with an order of their famous baked beans. The building was demolished in 1970 to make room for the construction of the Turcot interchange.

1905 - The maintenance garage for the Montreal Street Railway

The maintenance garage for the Montreal Street Railway streetcars was located at the corner of de Courcelle and Saint-Antoine around 1895. Note the wooden sidewalks, electrical wires, and numerous rails on the ground. It later served for bus maintenance until around 2000, when it was demolished to make way for what is now a Home Depot store. 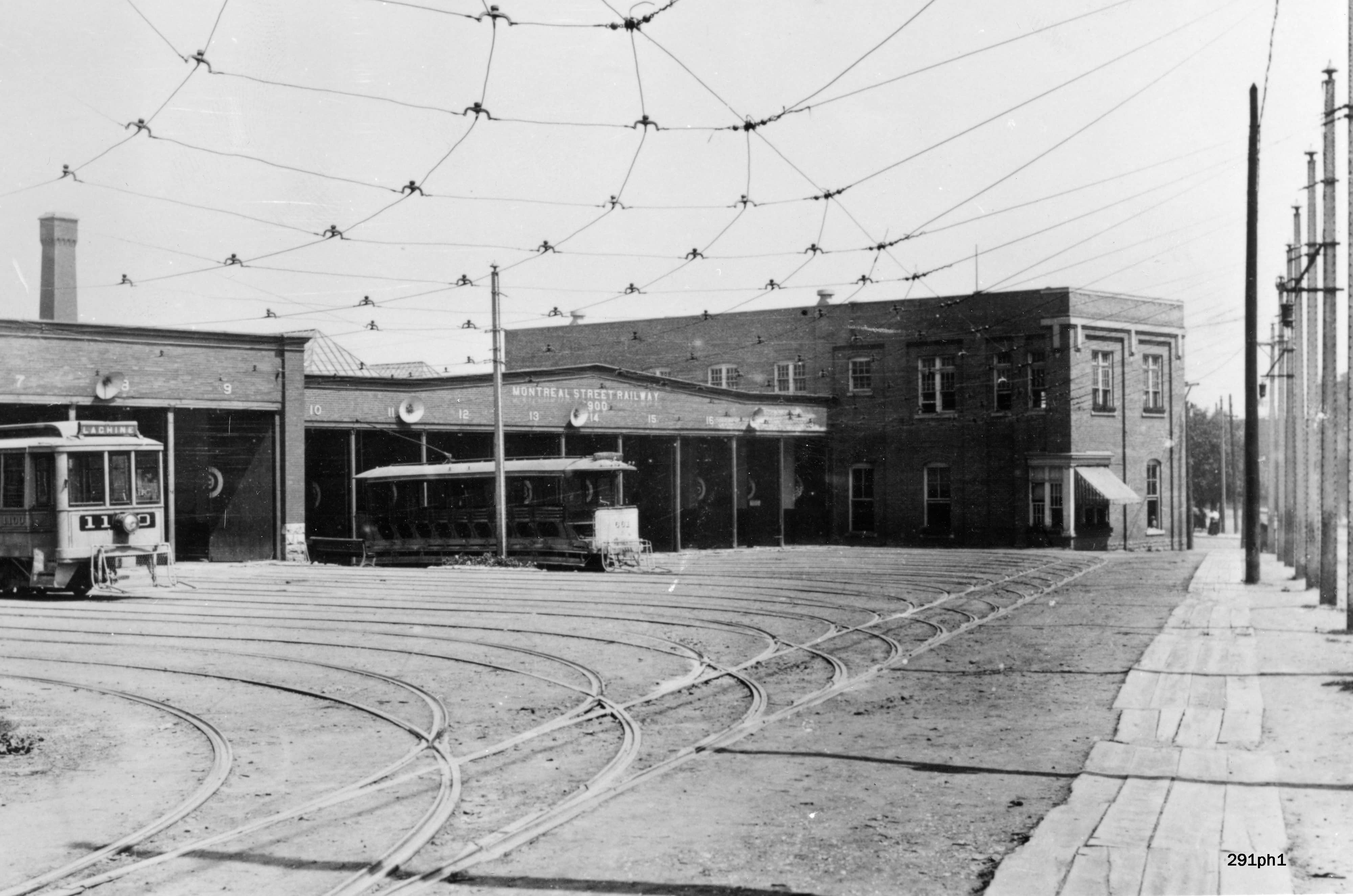 The inventor of the gramophone, Emile Berliner, had a factory built in Saint-Henri in 1908. It was later sold to the RCA Victor Company and expanded in 1940. Around this time, a state-of-the-art recording studio was also installed on the premises. After the gramophone era, the factory went on to manufacture radios and televisions. In the 1960s, it even produced Canada’s first satellite, the Alouette 1. Since 1998, it has been the site of the MOEB (Emile Berliner Museum of Sound). 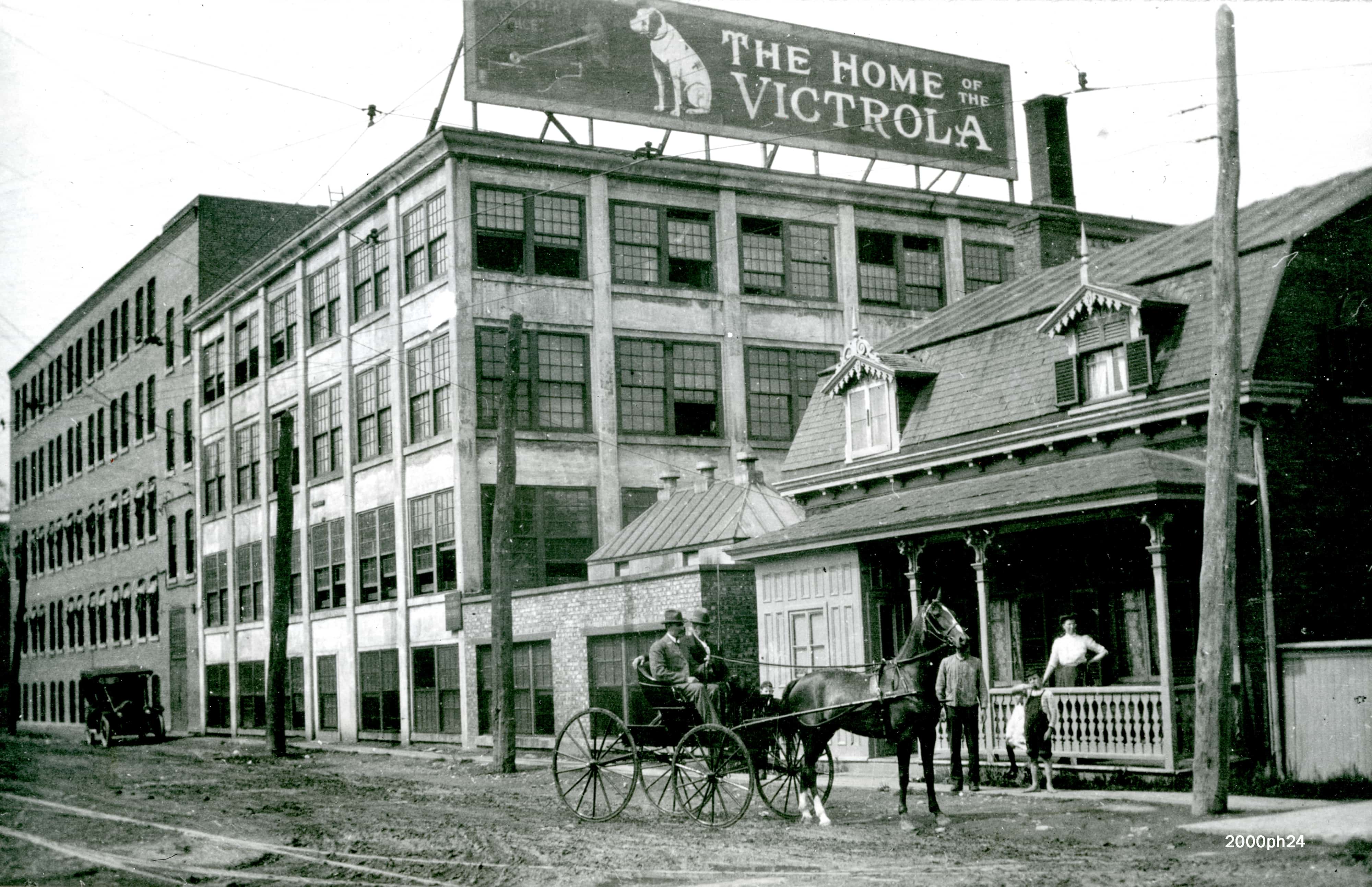 Between Du Couvent Street and Place Saint-Henri in two different eras. In 1930, the businesses from left to right were: the American 5 Cents to $1 Store, Geo Alepins, the New St-Henry Square Café, Jos Beaudin, and Jos Leclerc. 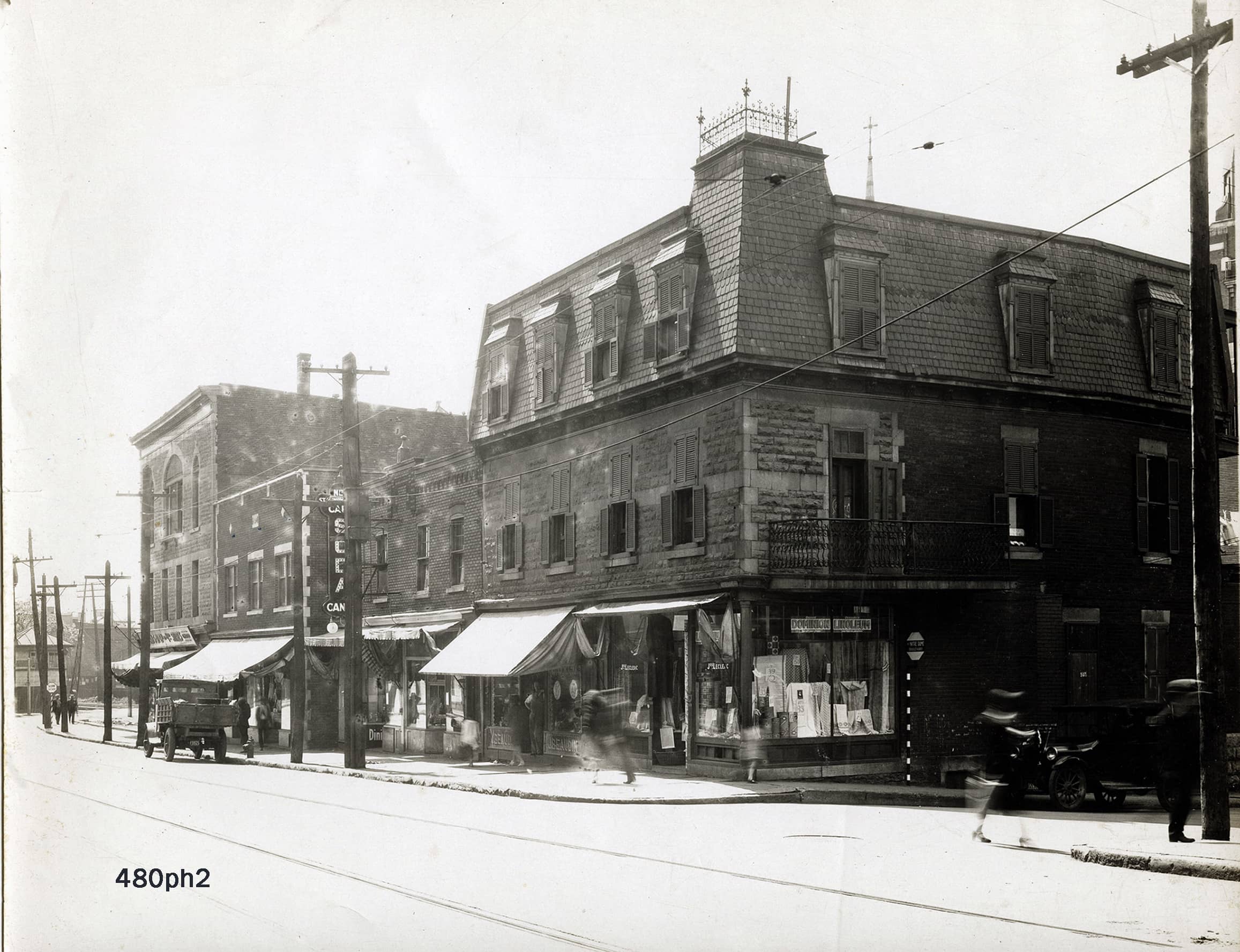 In January 1954, Georges Alepins had a major liquidation sale due to renovations. Today, in 2018,the location is home to the Venice restaurant and the La Gaillarde clothing store. The POPIR housing committee is located on the 2nd floor. 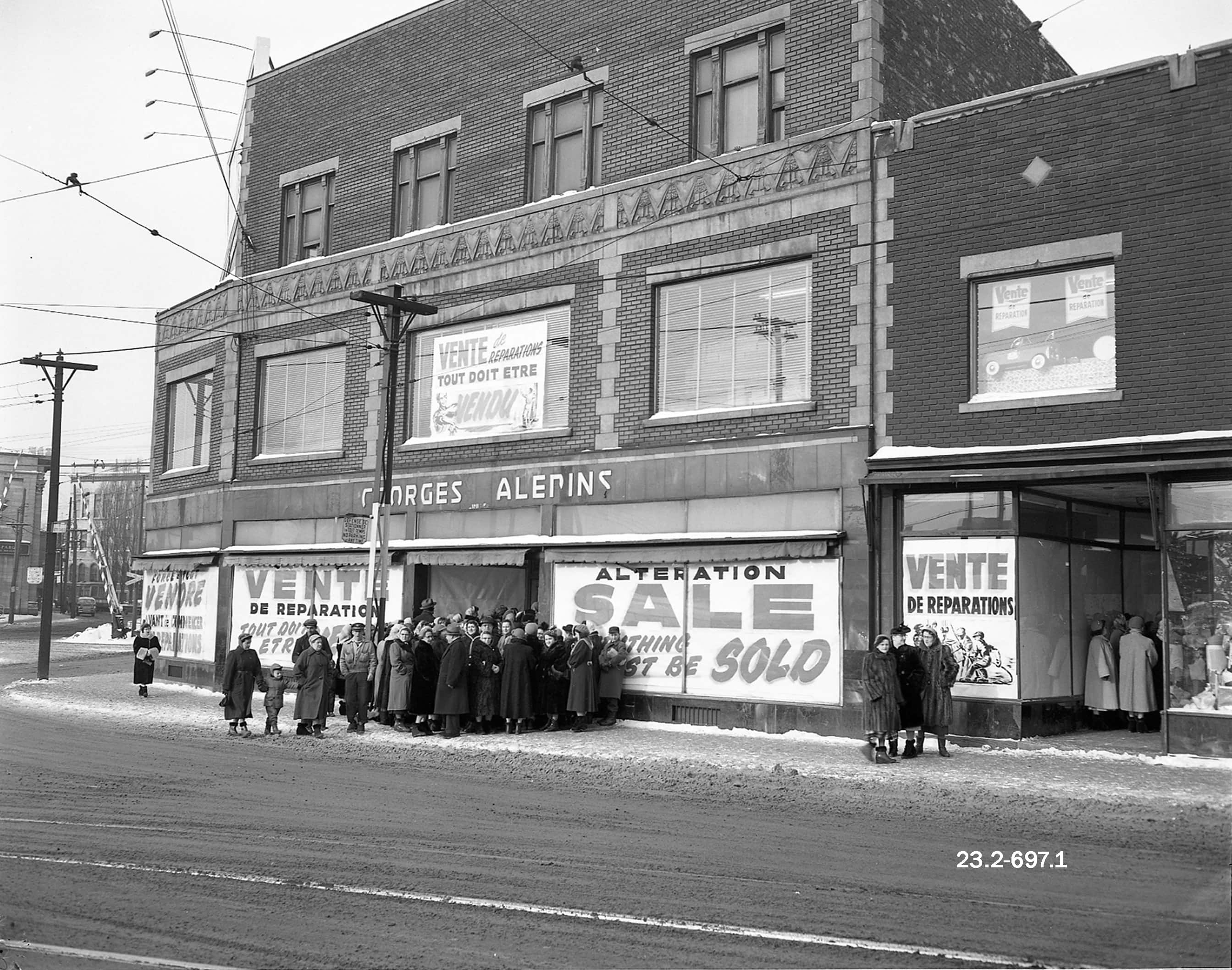 The Cartier theatre was constructed in 1929 by the well-known architect Raoul Gariepy. The world famous Emmanuel Briffa was in charge of the interior decor. The theatre featured more than 1,000 seats. Rose Ouellette “La Poune” held vaudeville and burlesque shows there until 1934. Later, it served as a movie theatre, and in the 1960s, it was turned into a dance hall. It was occupied by Dawson College from 1970 to 2007.

In 1926, 3955 Saint-Jacques Street was occupied by La Taverne Imperial. Its name was probably inspired by the Imperial Tobacco Company, located nearby. Up until the turn of the millennium, Saint-Henri was filled with countless watering holes like this one. The owner, Roméo Lamarche, is the first person on the left. 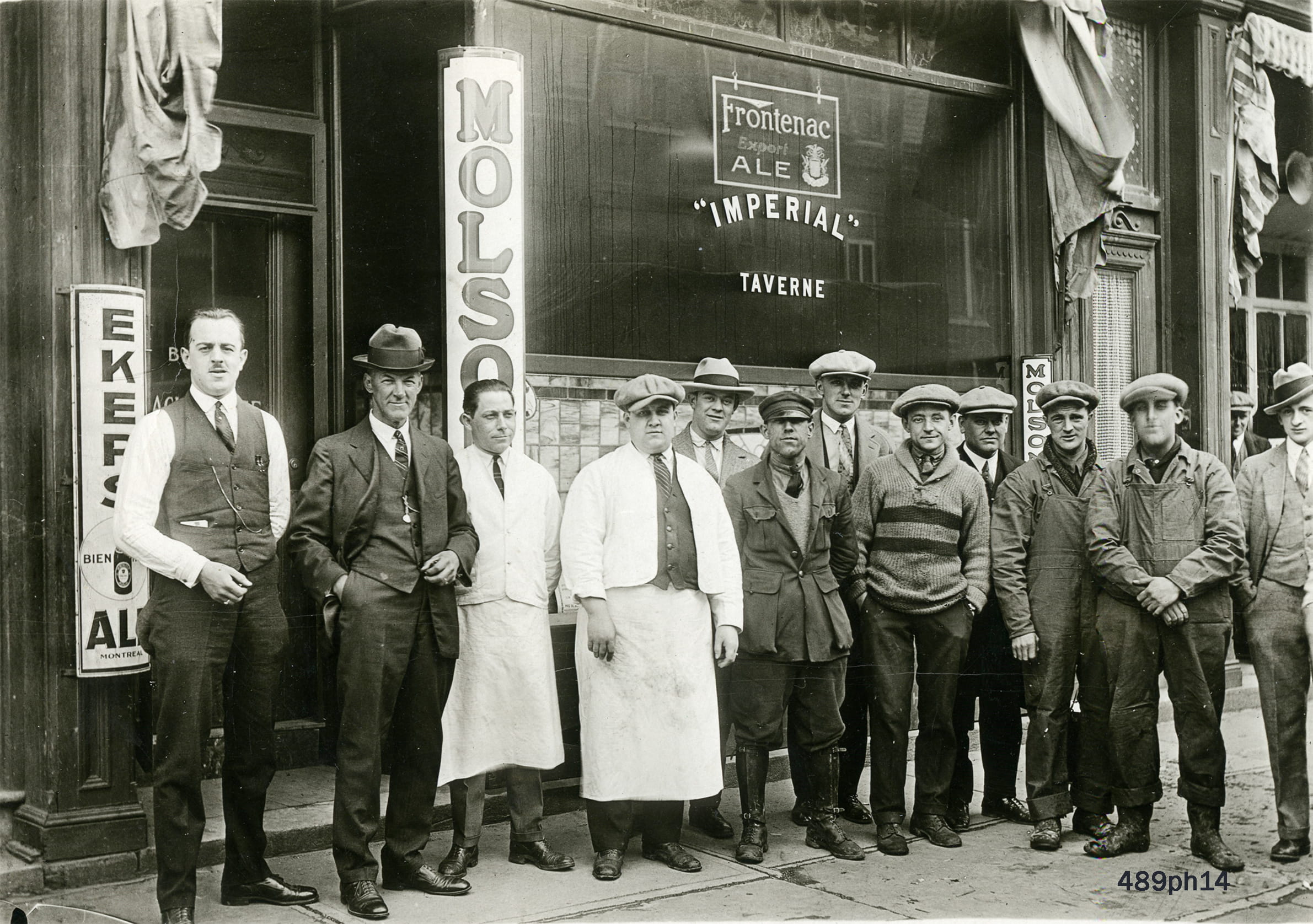 In 1961, after the Taverne Imperial, the 3955 Saint Jacques became the site of Michael’s Market. Léo Falardeau Plumbing was located nearby on the corner of Agnès Street. The very large surface the area made it possible to house a grocery store there from 1933 until the arrival of the catering business Maître et Chef. 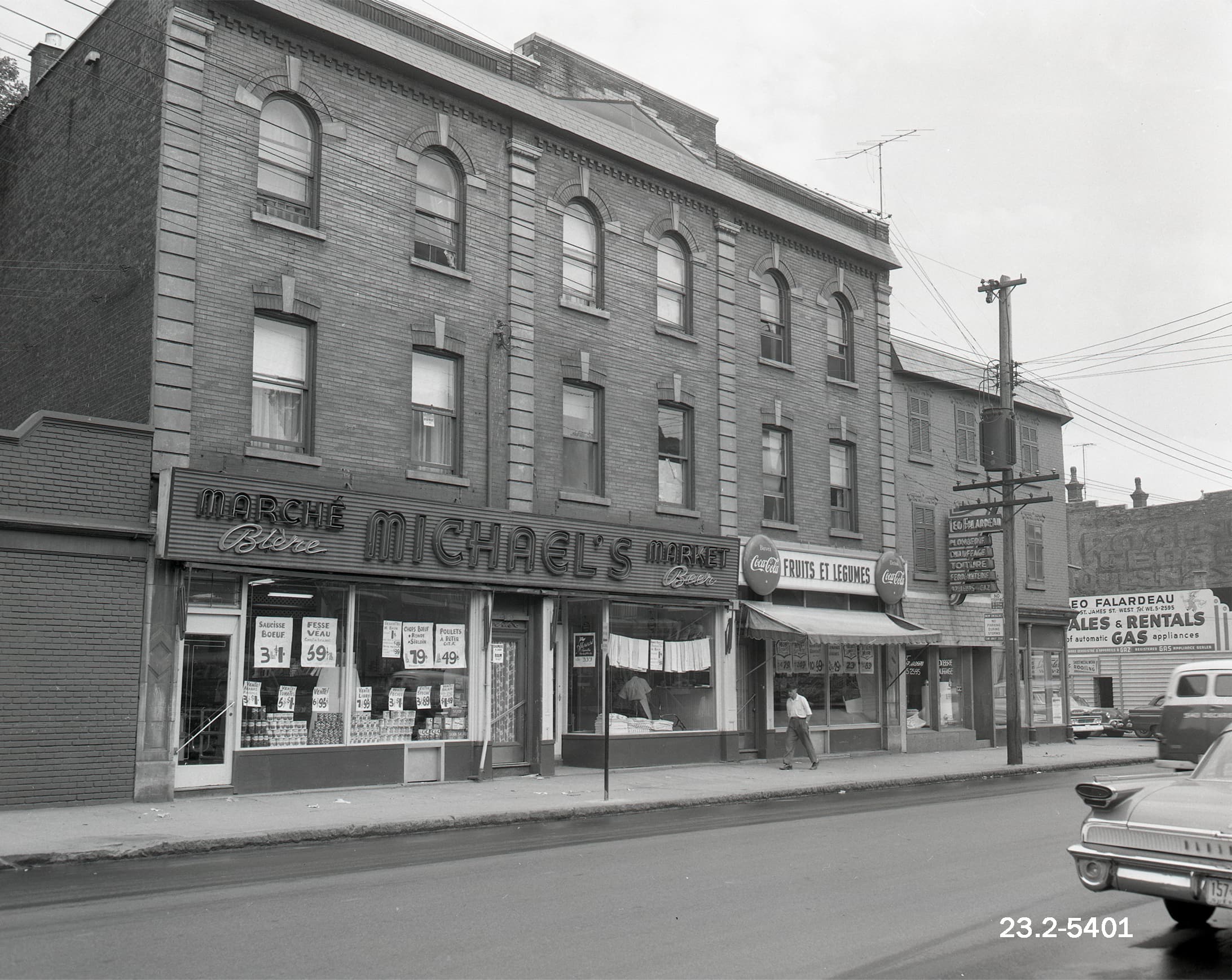 Postcard depicting Grand Trunk Railway’s Saint-Henri Station sometime around 1910. The Saint-Henri CLSC was later built on this site. Note the train on the right; the railway siding ran under Notre Dame Street West. 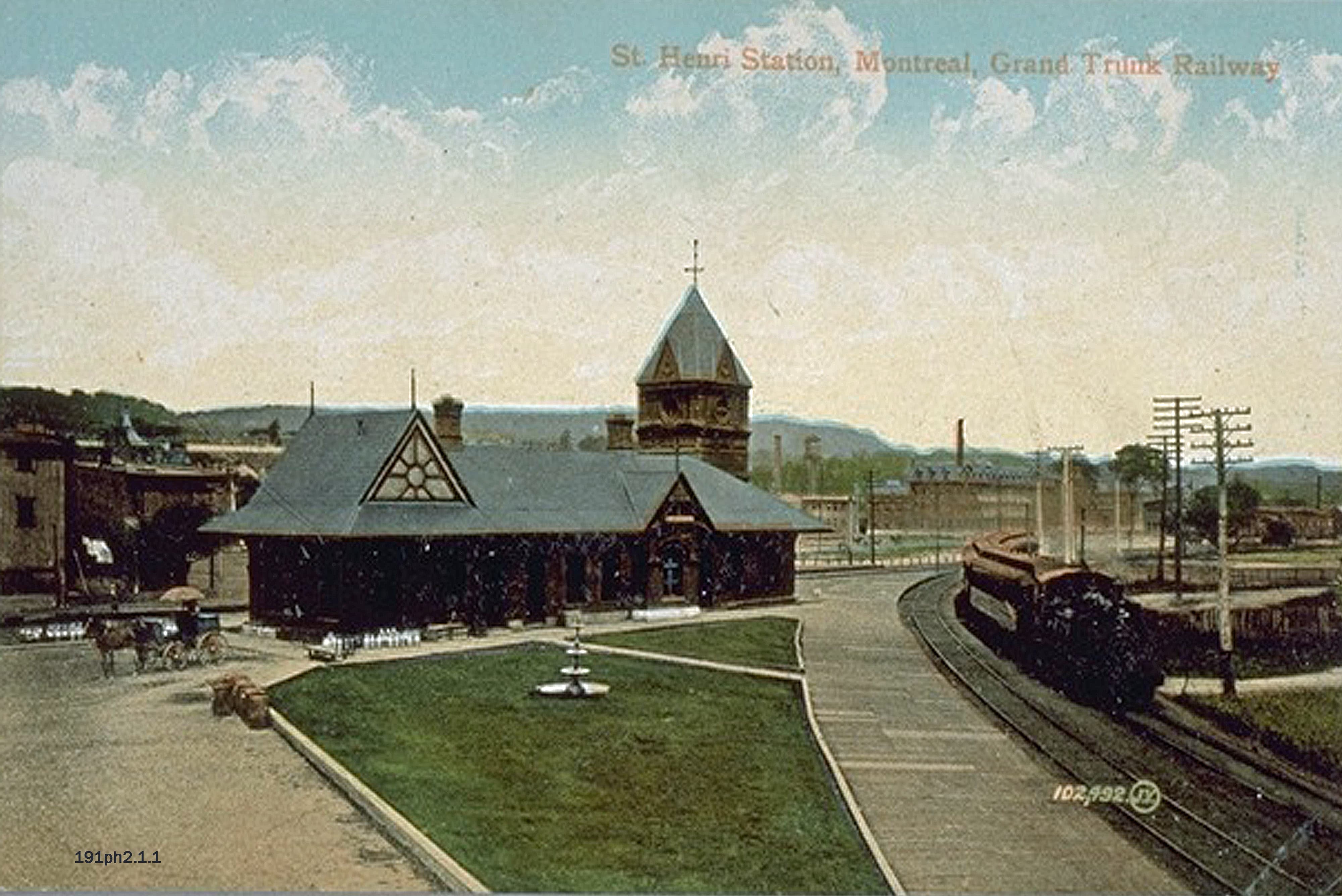 Taken in June 1967, this photo depicts the height of commercial activity. All the stores are occupied, and there is something for everyone. To the left, the site where Dollarama now stands was home to United Stores. The Famijeunes organization is now located in the right foreground. The B/A Gulf gas station building is still standing, though it is currently vacant. 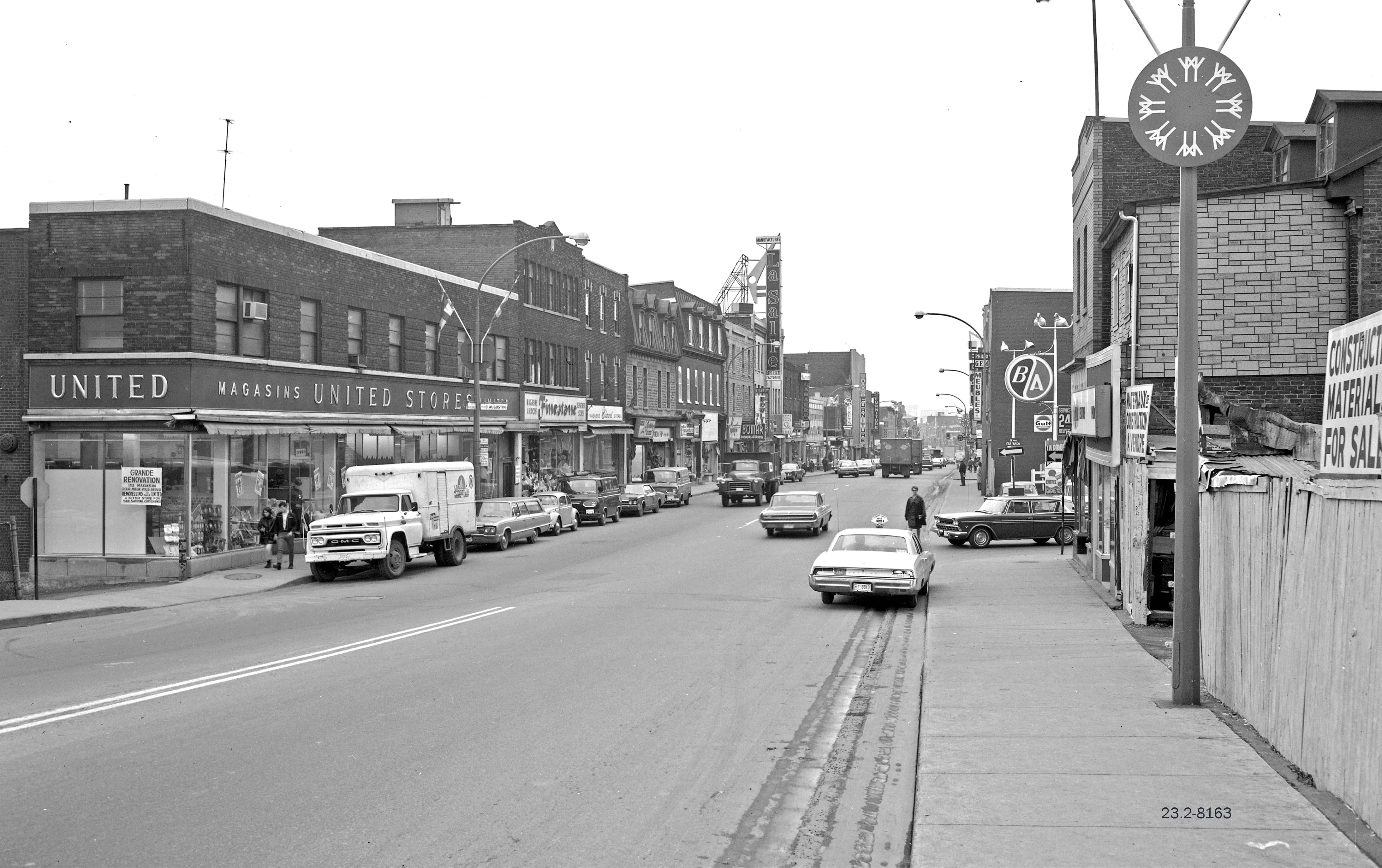 The start of a race on Notre-Dame Street around 1932. This photo was taken between Rose-de-Lima and Bourget Streets, in front of the Descoteaux Pharmacy, the St-Henry 5 Cent Store and F.X. Bourduas. Of course, these stores have all long since disappeared, but the buildings are still standing.

In 1939, Imperial Tobacco’s headquarters located at the 3810 Saint Antoine street and production facilities were decked out in British flags to honor the visit of King George VI and Queen Elizabeth the Queen Mother. Erected in 1908, the building was constructed of reinforced concrete, which was an innovative material at the time. Imperial Tobacco was one of the most prominent employers in Saint-Henri. One hundred years later, the buildings were restored to their original splendor to house the Imperial Lofts. 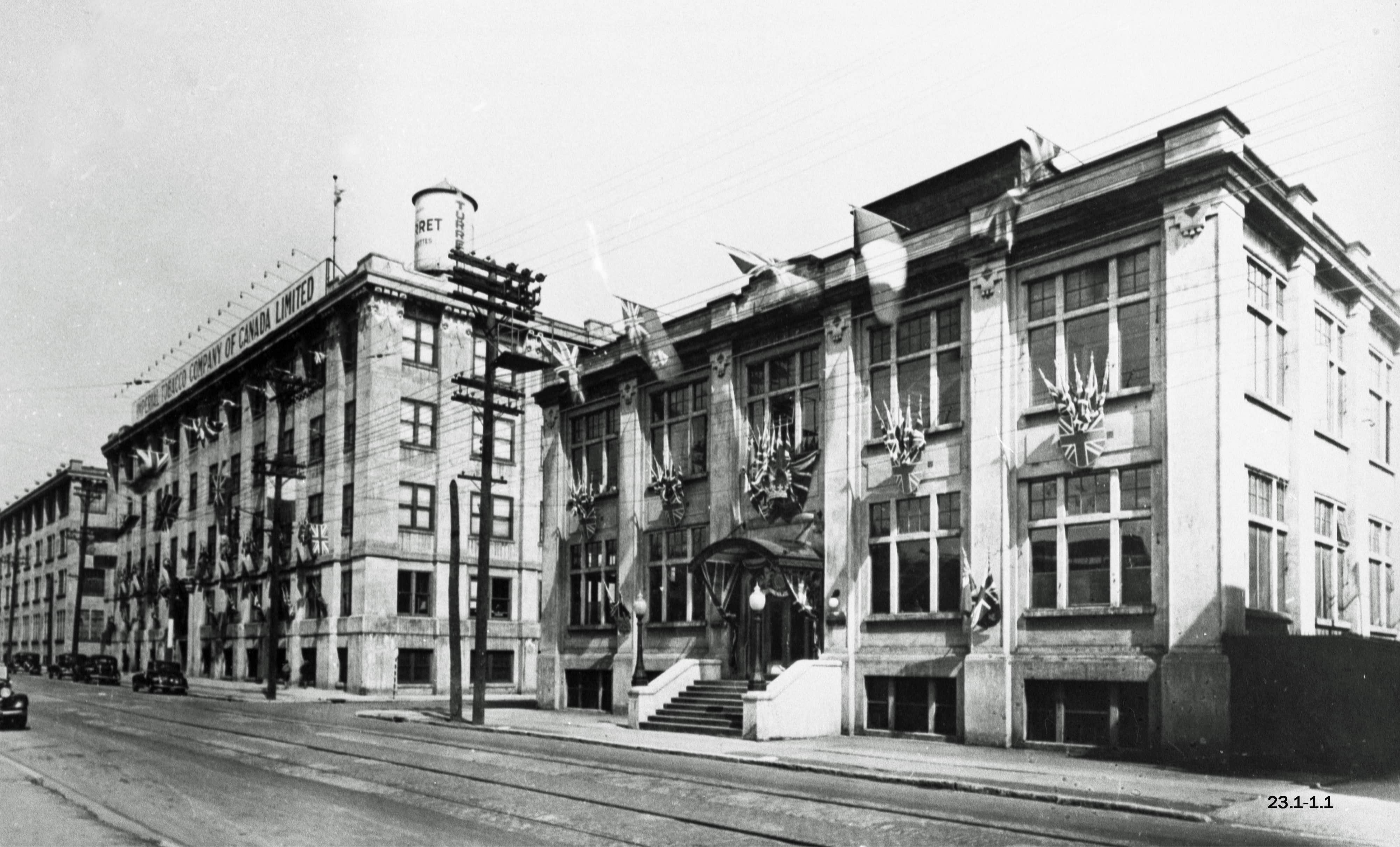 Located at the corner of Greene Avenue and Saint-Jacques Street, the Westmount Café quenched the thirst of thousands of customers from 1908 until around 1970. It was owned by Norjer Leroux. The Belles Dents dental clinic has occupied the premises since 2001. 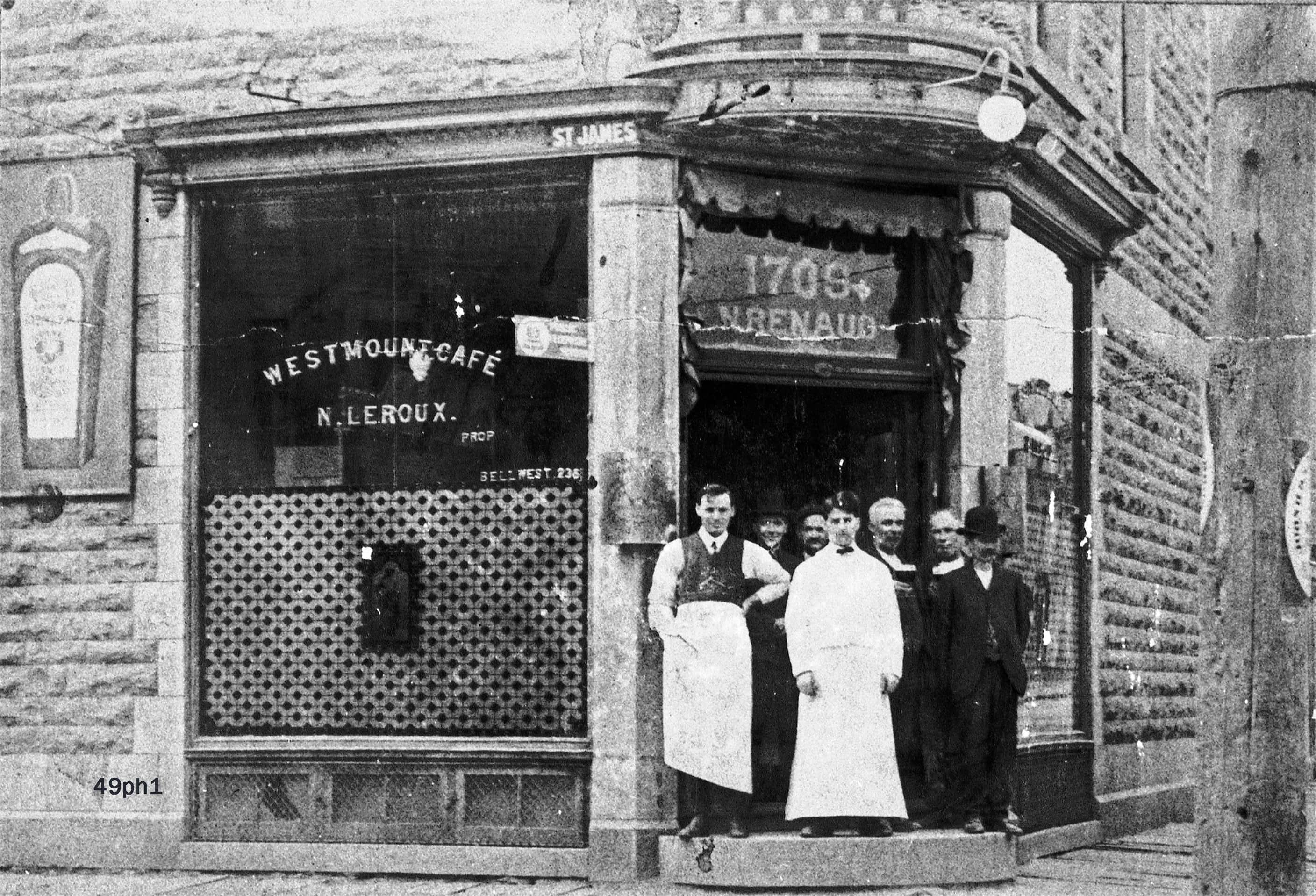 The modest Atwater Automobile dealership was located at 255 Atwater Street, near the corner of Notre-Dame Street, behind Place Jolie restaurant. These buildings have since been demolished and the site is now home to a gas station. 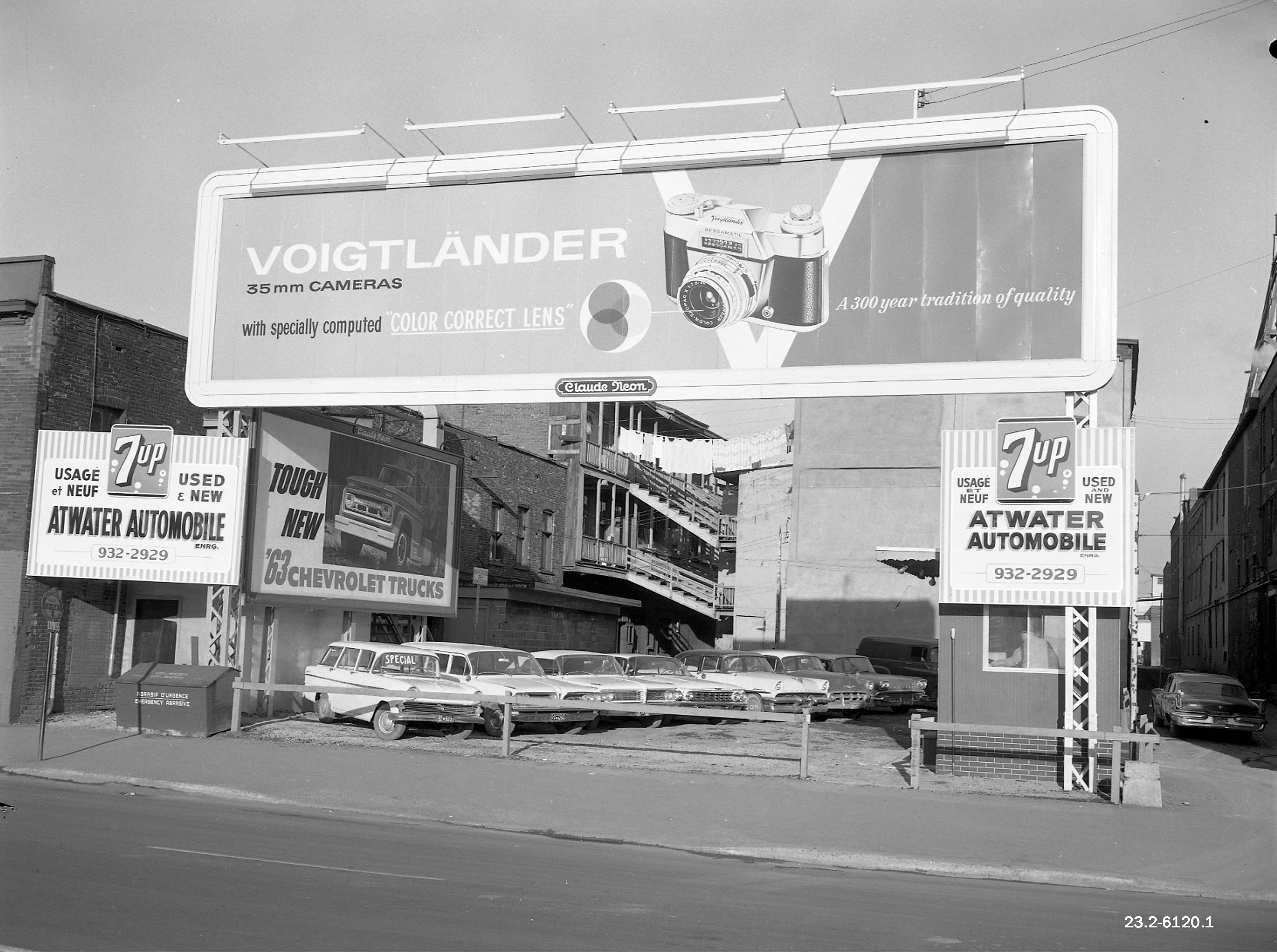 Flavours of the world