While visiting Montreal, Barack Obama chose Little Burgundy to eat with Justin Trudeau. In few minutes, the news spread throughout Montreal and the neighbourhood found itself on television channels around the world, small corner of town known for its reputation for a high level of excellence in restaurants.

On June 6, 2017, Little Burgundy hosted a dinner, under the worldwide spotlight. In fact, during his only visit to Montreal and, after his long-awaited conference at the Board of Trade of Metropolitan Montreal, the 44th president of the United States, Barack Obama, chose an address from Little Burgundy to eat and drink and enjoy an evening with Canadian Prime Minister Justin Trudeau. 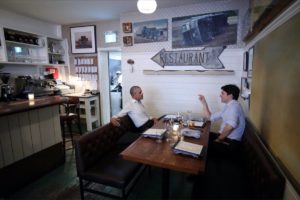 Notre-Dame Street West suddenly turned into a crowded street where thousands of curious people and journalists tried to catch a glimpse of the former President of the United States. In just a few minutes, information was broadcast on all local, national and international media. He is not the only one to have fallen in love with the neighbourhood. On June 24, 2017, it was the actors of X-Men who in turn took advantage of one of the restaurants of the district, accompanied again by Justin Trudeau.

Little Burgundy is known to attract Montrealers, but its reputation today exceeds the borders of Quebec and Canada. New playground of the greatest gastronomic critics, this small piece of town intrigues newcomers for its uniqueness.